Updated 11/9/15 - Due to high demand, NMBR will be guiding two separate five day [500-mile] expeditions that will traverse some of New Mexico and Arizona’s loneliest backroads. 
The Ghost Divide Expedition [Original] will take place during the week leading up to the Overland Expo WEST—Sunday, May 15th through Thursday, May 19th.  Participants will meet the morning of Sunday May 15th in Southern New Mexico; the exact time and departure location will be announced to participants on April 1st, 2016.


The Overland Expo WEST begins the morning of Friday, May 20th and ends the evening of Sunday, May 22nd.


The Ghost Divide Expeditions will require participants to be self-supportive with regards to vehicle, equipment, meals and supplies.  All nights will include camping and enjoying natural surroundings, deep in the backcountry.  Services of any kind, including cell, fuel, or anything remotely civilized, will be unavailable for stretches of up to 225 miles.  In the time leading up to the Ghost Divide Expeditions, participants (or Ghost Dividers) will be provided with helpful and extensive information on how to prepare for the adventure and what to expect.  The self-sufficient aspect of NMBR guided expeditions [and other 4WD based adventures] challenges and prepares participants for their future 4WD based endeavors—to go boldly, prepared, and with confidence. 
2016 will mark the 5th year New Mexico Backroads has guided the Ghost Divide Expeditions in connection with the Overland Expo WEST; this year’s route will be the longest, roughest and best yet.  The 500-mile Ghost Divide Expeditions will include a diverse range of scenery and terrain including desert, grassland, chaparral, forest, rivers, canyons, creeks, lakes, and wildland burn scars.  Road types and conditions will include canyon bottom narrows, washboards, rutted two tracks, primitive non-maintained, graded, mountain shelf, and [least of all] paved highway.  The Ghost Divide Expeditions will feature outstanding vistas, dozens of water crossings, historic landmarks, wildlife viewing opportunities [including Mexican grey wolf territory], and aggressive elevation contours [between 4,000 and 9,000 feet].  For those that join in, the only guarantee is that they will conclude their adventure with new friends, dirty rigs, big smiles, and stories that will make their fellow overlanders envious.


Perspective from a 2015 Ghost Divider -


"Just finished the Ghost Divide Expedition II with Jake Quinones, our guide at New Mexico Backroads and I just can't say enough of what a great time I had. The trip was seamless, the scenery and backcountry was just absolutely beautiful. But our guide made all the difference in the world. His knowledge and history of all the areas were outstanding, making the places we saw come alive. I never questioned his capability or his professionalism at any time. I would and will travel with NMBR many more times in the future! One trip off the bucket list. Now for the rest..." - Debbie W., Northern Arizona 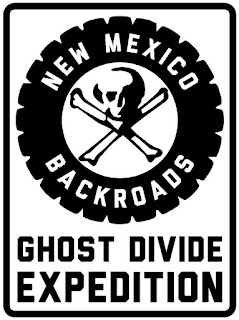 
If you are interested in joining one of the 2016 Ghost Divide Expeditions [Original or II], please email nmbackroads(at)gmail.com for full details, pricing and registration information.
Email Post