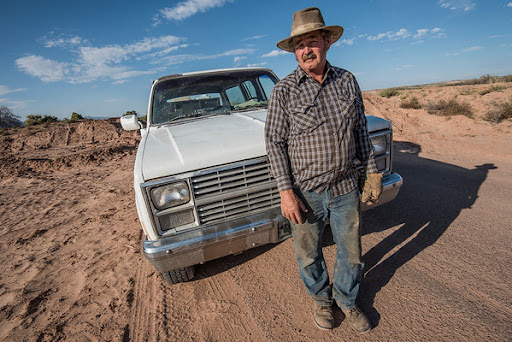 Jim Taylor stopped to ask if I needed help while I aired up my tires near Bosquecito. In the miles leading up to his stop, every loose piece of steel in his truck and trailer could be heard; clanking in defiance of the rough road. Jim owns and operates a trash hauling business that services the rural communities surrounding San Antonio, New Mexico. His handshake was like a vice-grip and his unflinching gaze was of equal strength. The area lowlands had flooded during the summer monsoon, leaving miles damaged and sand covered [paved] roads, and debris in trees as high as six feet. Deep tracks in the soft shoulder revealed the hardships of those that made the mistake of going off course. When Jim passes stragglers, he stops and asks them if they need a wrench, a tug, or a ride. He's seen it all [good and bad] in the decades he's traveled the maze of backroads that connect his route. Through our conversation, he told me about growing up in the area, having a family, starting a business, and watching his kids move away to larger towns. He also told me about the wars, families, fortunes, and tragedies that shaped the community's rich history. Jim was kind enough to let me capture this image before we parted ways. - Socorro County, NM
Email Post