Who’d be crazy enough to meet up with someone they had never met before, at a truck stop in Southern New Mexico, for a rugged and remote trip along the US/Mexican Border? As I departed Las Cruces at 3AM bound for Lordsburg; I wondered how many of the five that had signed on for the Borderland Overland would actually show. I pulled into the Pilot truck stop 120 miles later, still under the cover of darkness, to find I had actually fooled these fearless drivers into coming. It was there I would meet a mixed bag of guys that would later be described as a “motley crew”. Possibly they had fooled me into taking them? There was Jay “Foul Mouth” from Chicago driving a Rubicon, Brad “Wilderness First Response” from Denver driving a Tacoma, John “Shaggin’ Waggin” from Tennessee driving a Syncro Campervan, George “The Most Interesting Man in the World” from Quemado, NM driving a FJ Cruiser and finally Kirk “Fire Axe” from Santa Teresa, NM driving a FJ Cruiser. While some would say that your typical overlander sports a get-up similar to what a Frenchman would have worn in the mid 60’s while traversing the Kalahari, our group looked better prepared for a Baja beach bar. Once the convoy was rolling, and the CB radio banter began, I quickly realized why I asked that those under the age of 18 sit this one out. From Lordsburg, we traveled due south until the pavement ran out, deep into the “Boot Heel” of New Mexico. Dust was already beginning to settle in the valleys like fog as the Border Patrol was changing shifts; the white and green trucks were passing us on the narrow dirt roads at highway speeds. As the sun began to illuminate the grassy plains of Hidalgo County, a landscape that resembled the opening scenes of ‘No Country For Old Men’ revealed itself. “Welcome to the Borderland Overland” I said over the radio as we pushed further south towards Mexico. 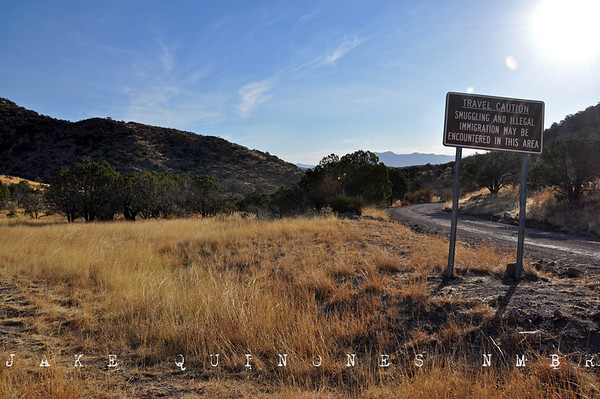