-Last year alone, the Mexican Drug war claimed the lives of over 6,000 people; the killings since January have outpaced those figures as the violence rages on. The border communities of America wait and watch in silence as the war knocks on our backdoor. Recent stories of the Drug War along the U.S./Mexican Border have provided a glimpse into the escalating brutality that has brought Northern Mexico to its knees. At the bottom of New Mexico lay Columbus, border town to Palomas, Mexico; a sleepy ranching community home to cowboys, artists, migrants and everything between. Columbus has recently drawn national attention as its bordering town of Palomas has become reminiscent of the Wild West. The Palomas police chief has sought asylum in the U.S. while the remaining force has all but vanished in response to Cartel escalations and slayings in the area. The Columbus community and law enforcement seems to be watching and waiting as the war pushes across the border. 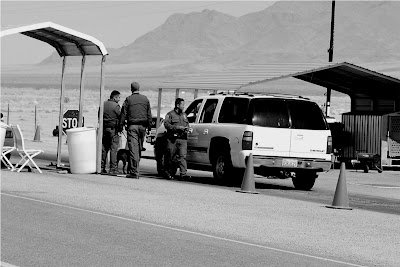 Spurred by an LA Times article published earlier in the week I geared up and headed south to see the area for myself. I’m not sure if it was the mindset leaving town after having freshly researched news stories, local stories and disturbing images of the bloody violence but as I approached Columbus a ghostly tension set in. 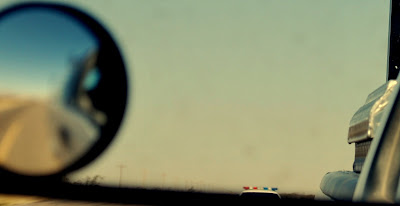 On my way in to Columbus I pulled off the road to photograph the Border Patrol Checkpoint and passers. After snapping a few shots I continued down the road and realized that I had new company. A Border Patrol unit followed me into town; it seems they took issue to this stranger’s camera. My thoughts were that their suspicion lay somewhere in between curiosity and fillings for a slow day. I am not often comforted by the presence of the law, especially when being followed. The sight of my maps, GPS, gun, pack and camera would make for an interesting explanation; not the normal kit for a blogger. 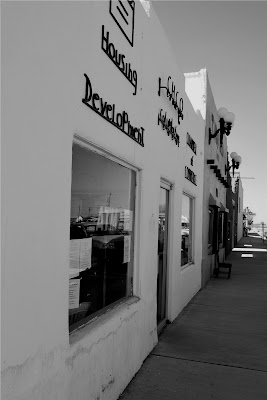 They never confronted me, the two agents just watched me from their car under tree shade as I walked the length of the main street. The town was empty, most businesses were closed and the only movement was from the dusty breeze pushing leaves and papers down the street. Brightly colored buildings featured such comforts as the local café, gallery and theater; giving a high contrast to the barren surroundings. Most other structures were weathered or seemingly temporary, the yards were elaborately fenced with iron and rock walls, the park was new and the highway to the border crossing was the only good road to be seen for miles. The agents must have been impatient as they did not follow me in tour of the rest of the town. My thought remained, “where was everyone?” 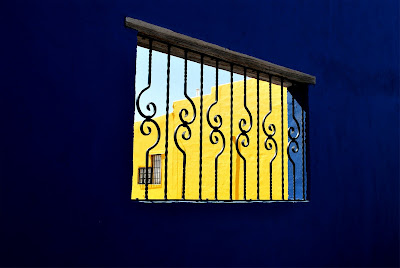 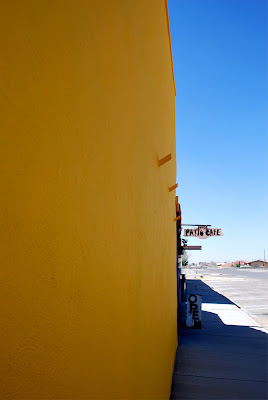 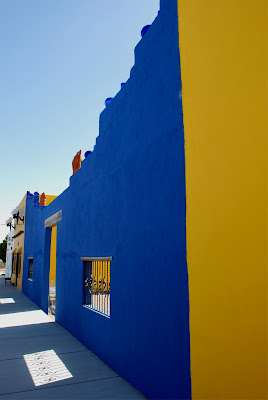 Old Columbus Jail – Built in the 1920’s in response to the town’s booming population. The abandoned jailhouse now remains dilapidated on an empty lot corner 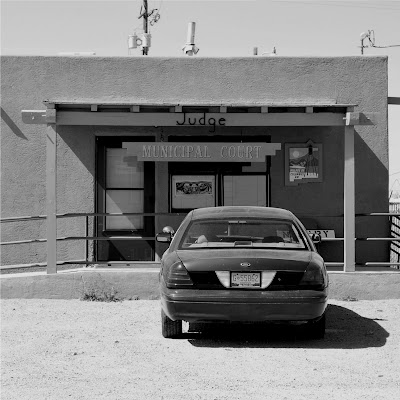 The border is slow today in comparison to what I’ve seen in Juarez. I’m watching nicely dressed families crossing in and out of Mexico laden with goods, everyone carries their capacity. The items coming into the States are mostly packaged in produce boxes and suitcases while the push carts headed into Mexico are laden with Wal-Mart bags. A small lesson on imports and exports this was. As many children as adults are here, excited they clutch new toys and refreshments walking alongside their parents. Is this the same Palomas that was featured by the LA Times a week ago for murder and bloodshed? Tourists- limbs bright white from winter hibernation, they walk around in bright clothing and sunhats, cameras held tight. I heard a middle-aged woman say to her husband as she passed by, “Do you think I should take my purse?” I chuckled inside watching the locals pushing their carts with untold amounts of material significance into Mexico. 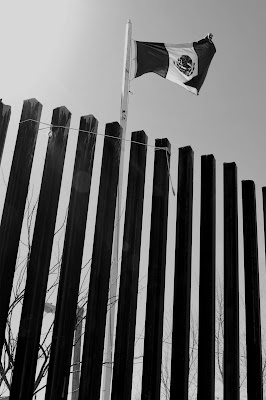 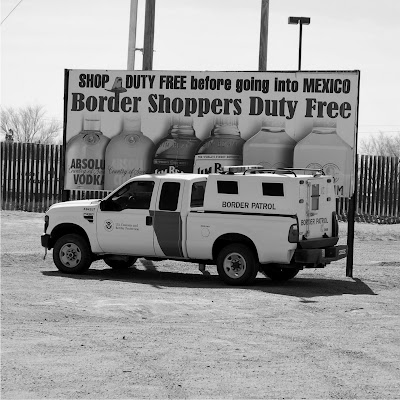 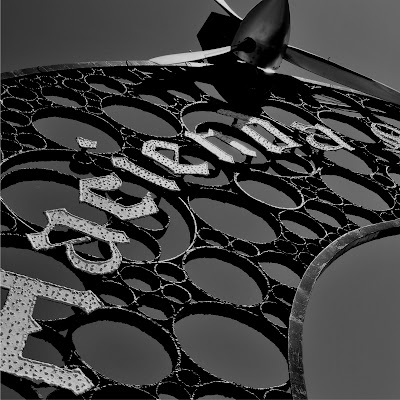 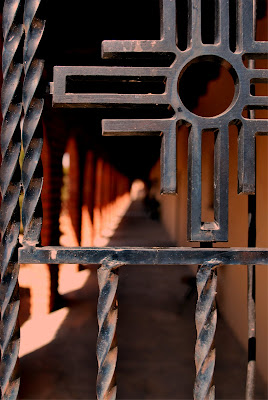 Departing Columbus I visited the deteriorating ruins of a once massive “fly-in” retirement community. The place looked like vintage roadside motels strung together for nearly a 1/8th of a mile. The centerpiece and entry was crafted from mismatched pipe scrap creating a drive-thru arch that lead to a runway and massive biplane replica. The rear of the buildings showed signs of life as new trucks and RVs were parked bearing plates mostly from the Midwest. Imagining the beginnings of this place got me thinking about the people that built and once inhabited this place, now in shambles. Like a tribe departing from their cliff dwellings during drought, these people seemed to have taken-off and never returned. 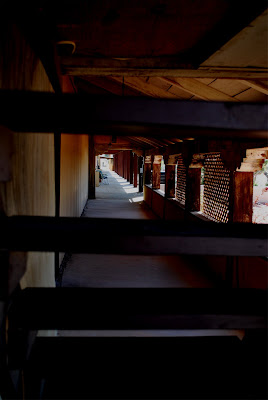 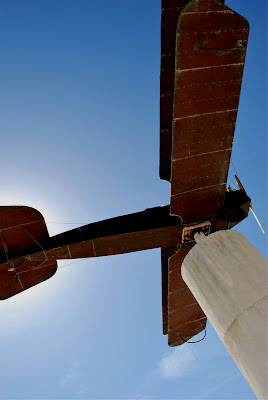 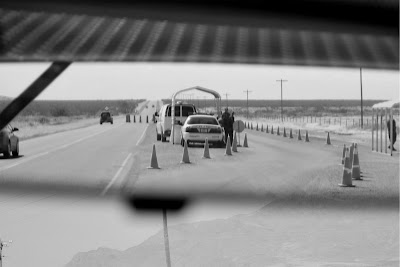 I was stopped at the Border Patrol checkpoint to find my followers form earlier awaiting my arrival. I waited as the drug dog moseyed around my truck unimpressed by its scent. While the agents talked quietly I watched the mountains through a rising orange haze as the wind was picking up. What surroundings! The desert here was truly bare of any magic today under the noon sun. I was approached by whom I assumed was the boss looking all of thirty and the oldest of the group.
Agent- “Where you headed?”
Driver- “Home”
Agent- “Where’s home?”
Driver- “Las Cruces”
Agent- “Are you a photojournalist?”
Driver- “No”
Agent- “Then what are you?”
Driver- “I’m just a guy with a camera”
The agent hesitated and looked at the others
Agent- “Have a nice day”
Proud of the agent’s assumption I wondered what a life it would be if I could have said “Yes”. I may not last long in these parts. 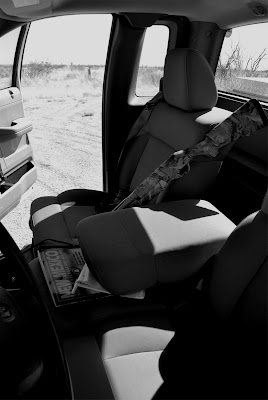